”Never underestimate the voice of an individual committed to bring change. It is from such, that change is found.”
James Wakibia, Kenya, Environmentalist and Photo Journalist

While trying to increase the number of African activists on my radar, I followed back some posts and came across James Wakibia, who I realized was a fierce advocate for plastic bans and proper management of plastic waste in Kenya. His impressive number of followers on Twitter reaching 20.600 (as of 2021-09-25) indicates his national and international impact of his work, so after some chasing after  busy James to get hold of him I am happy that he finally agreed to join my series on outstanding African activists!

Question 1: Hi, James! Nice to meet you! Can you tell me about yourself?

Answer 1: I am a freelance photojournalist and an advocate against plastic waste in Kenya.

Question 2: Why have you become an activist? What do you want to change?

Answer 2: The reason why I became an activist was to use my voice to influence change. I was angered by how heavily our environment is polluted that I decided to start campaigns on the ban of plastic bags, today I raise awareness on the need for better management of plastic waste, I still call for a ban on single use plastics, not just in Kenya but in Africa. My idea was to trigger changes that will help us to live in a cleaner environment.

Question 3: What organisations, movements, or people in general do you collaborate with?

Answer 3: I have worked and partnered with so many people, from organizations championing for plastic free oceans to youth environmental movements, I have also worked with organizations that are at the forefront demanding more accountability from plastic producers, to compel them to be more responsible for the end of life of their products. Generally, I work with anybody who is environmental conscious.

Question 4: Can you shortly describe your most important projects and personal achievements?

Answer 4: I think my most important project was the #IsupportBanPlasticsKE. It was both an online and on-the-ground campaign where I interacted with different kinds of people as I campaigned for the ban on plastic bags in Kenya. I am happy that my campaigns to phase out plastic bags in Kenya were not in vain and today we are enjoying the gains, that is one of my biggest achievements, running a nationwide campaign without external support.

Question 5: What are the most important barriers? What would you need to overcome these barriers?

Answer 5: A barrier in my campaign, I think, was being misunderstood. Some people thought that I had vested interests while in actual sense I was just being me and doing something that would bring a change for all. If everybody understood the impact plastic was/is causing the environment it would be much easier to solve the problem.

Question 6: Who and what inspires you? People, books, own experiences?

Answer 6: I am inspired by people who are creating change, either through reading what they have done and through observing what they do in an extraordinary way. People like Boniface Mwangi, a Kenyan human rights activist, is one person I really admire. He gives me the courage and confidence to approach issues differently, The Late Wangare Maathai stood up to Kenya’s worst dictator and won, despite being harassed and threatened she did not give up. Young Greta Thunberg from Sweden has shown the world that you can speak up and be heard, and the world is listening to her, the power to believe in what is right and stand by it. I am also inspired by my own experiences, just the fact that I have been able to achieve certain things makes me feel that we all have some secret power within us which we can use to bring change, big or small. I believe in the words of Margaret Mead ‘’Never doubt that a small group of thoughtful, committed citizens can change the world; indeed, it’s the only thing that ever has.’’ And I add, “Never underestimate the voice of an individual committed to bring change, it is from such that change is found.”.

Answer 7: People in the Global North need to understand that we people in the Global South are humans. They are not special in respect to being human beings and, therefore, we need to be treated fairly and equally. The fact that the Global South is poor doesn’t make it right to be treated as second class citizens. The biggest issues affecting us today like Climate Change and Plastic Pollution did not originate from the Global South. We are suffering from problems we did not create, and we demand better, we demand justice from the Global North for the wrongs they have committed and continue to do, for even colonizing us, for enslaving our people. We can’t forget.

Answer 8: The Global South could learn how to be more egocentric and to love themselves as the Global North has always done, is that being selfish, then that’s what global north has been or portrayed, to care more about themselves and nobody else, the rest can be places that can be exploited, from minerals to artefacts and everything else that is good. Global North doesn’t give so much a shit about the Global South except where they can mine something. See them exporting trash to the global south, what the heck do they want us to do with their trash, Global South should take care of itself.

Question 9: What is your vision for Africa?

Answer 9: That’s a BIG question, but in line with what I do, I want an Africa that has a plastic free environment, that understands the importance of protecting the environment. It’s commendable that over 30 African countries have so far banned and put restrictions on certain single-use plastics. This shows that Africa is committed to addressing the issue of plastic pollution. All countries in Africa should join forces to completely do away with single-use plastics and plastic waste trade. We cannot accept to be anybody’s toilet.

Question 10: What question should I ask, but did not ask?

Answer 10: What challenges have you faced in the course of your campaigns?

Question 11: What is your answer to your question?

Aanswer 11: I have faced many challenges but I don’t think about them a lot. When your fuel is passion challenges get dwarfed.

Question 12: Thank you for your time, James! 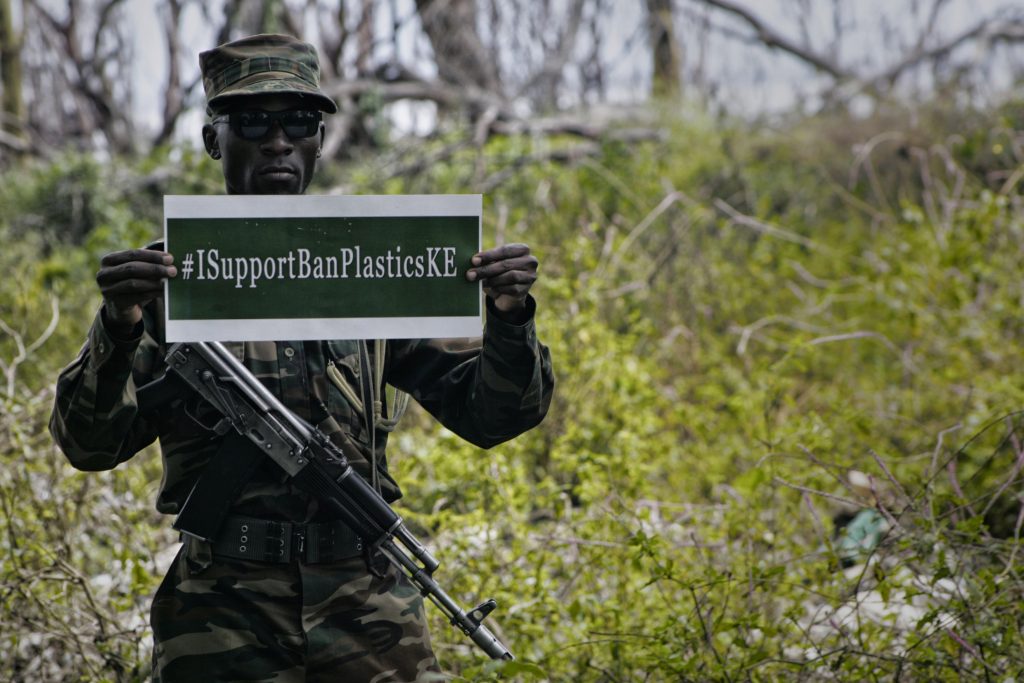 NAKURU, KENYA – 2015/10/15: A Kenyan Wildlife Service game ranger holds a placard saying ‘I Support Ban Plastics’ at Lake Nakuru National Park during the campaign to ban single-use of plastic bags.
During the World Environment Day, Kenya begun implementing a ban on single-use of plastic in all its protected areas. Previous plastic bag ban has been hailed as being successful by many. (Photo by James Wakibia) 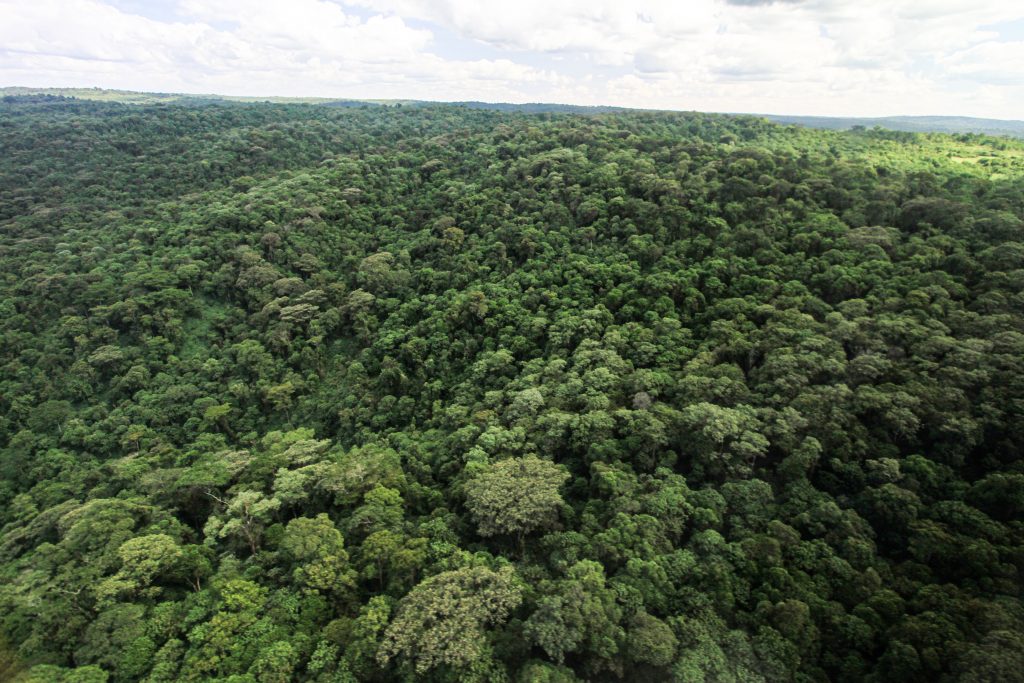 NAKURU, KENYA – 2020/07/18: An aerial view of Mau Forest.
The government of Kenya is forcefully evicting people who allegedly settled on gazetted forest land to pave the way for reforestation. There have emerged widespread complaints about the way government is handling the issue. Human Right organizations have decried the brute force meted out on those residing on the forest land who are mostly poor people. Critics have called the process unfair and illegal. (Photo by James Wakibia) 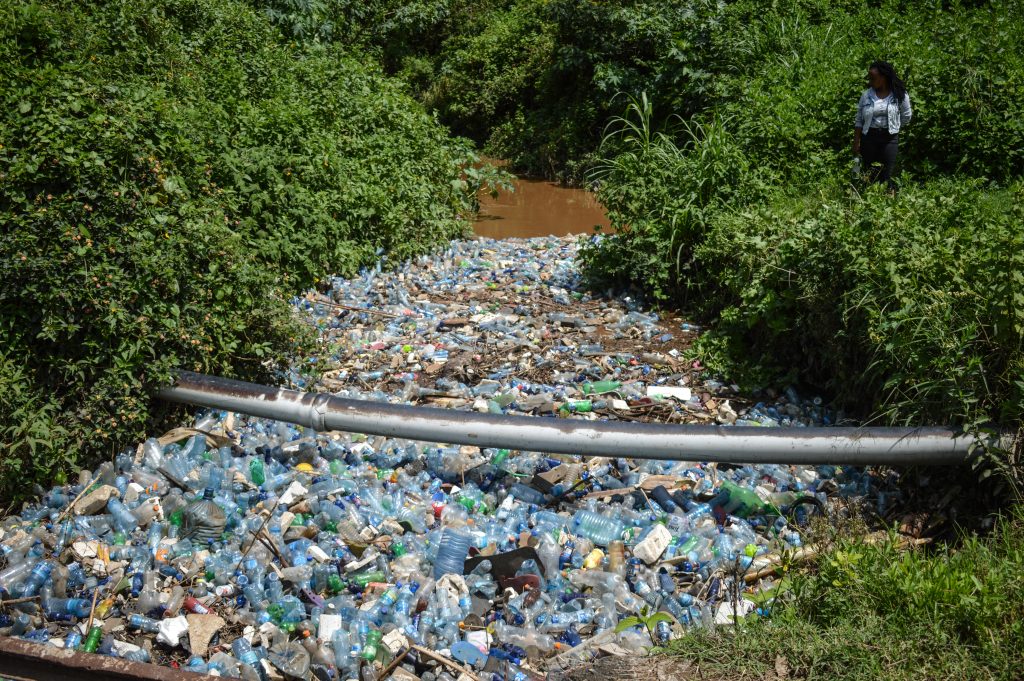 NAKURU, RIFT VALLEY, KENYA – 2019/06/06: A young woman stands next to Njoro River clogged with thousands of plastic bottles among other kinds of trash. The River that empties its contents into Lake Nakuru, a UNESCO world heritage site carries tons of trash mostly plastic from human settlements. A report says that by 2050 the oceans will have more plastic than fish. (Photo by James Wakibia) 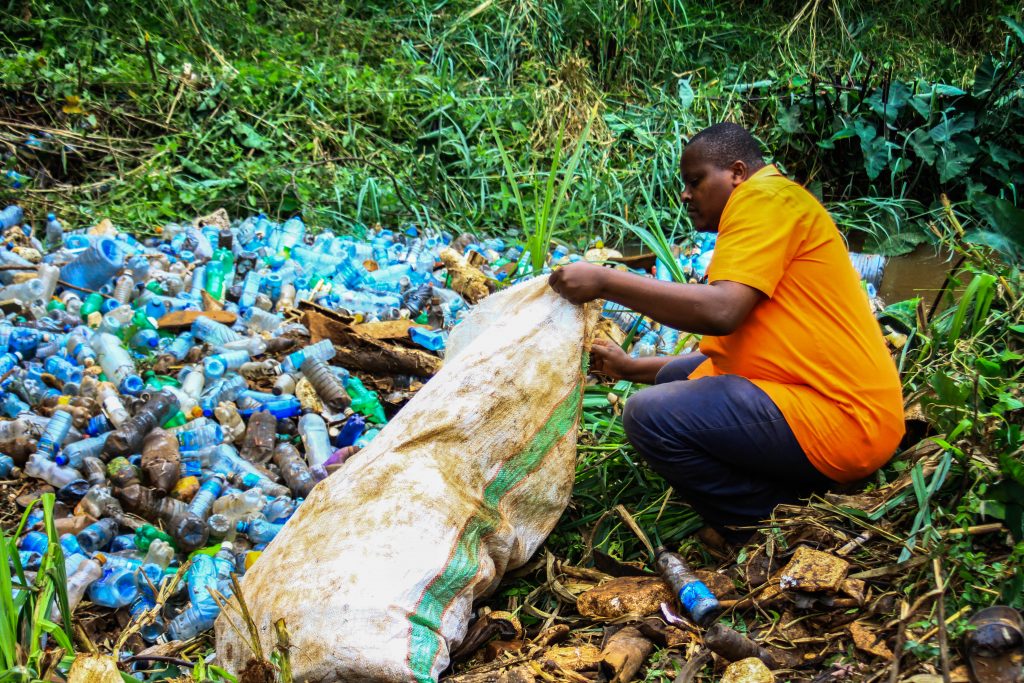 NAIROBI, KENYA – 2020/08/25: A volunteer removes plastic bottles and other trash polluting Ruaka River.
An increasing production of single-use plastics for beverage and other uses has become a nightmare in solid waste management in Kenya. (Photo by James Wakibia) 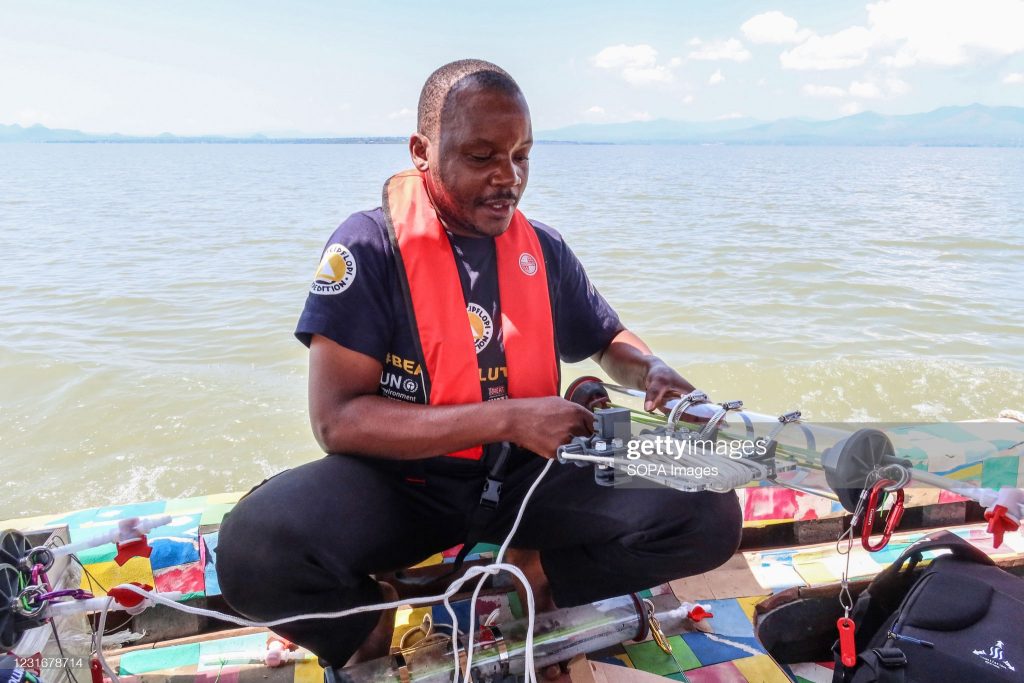 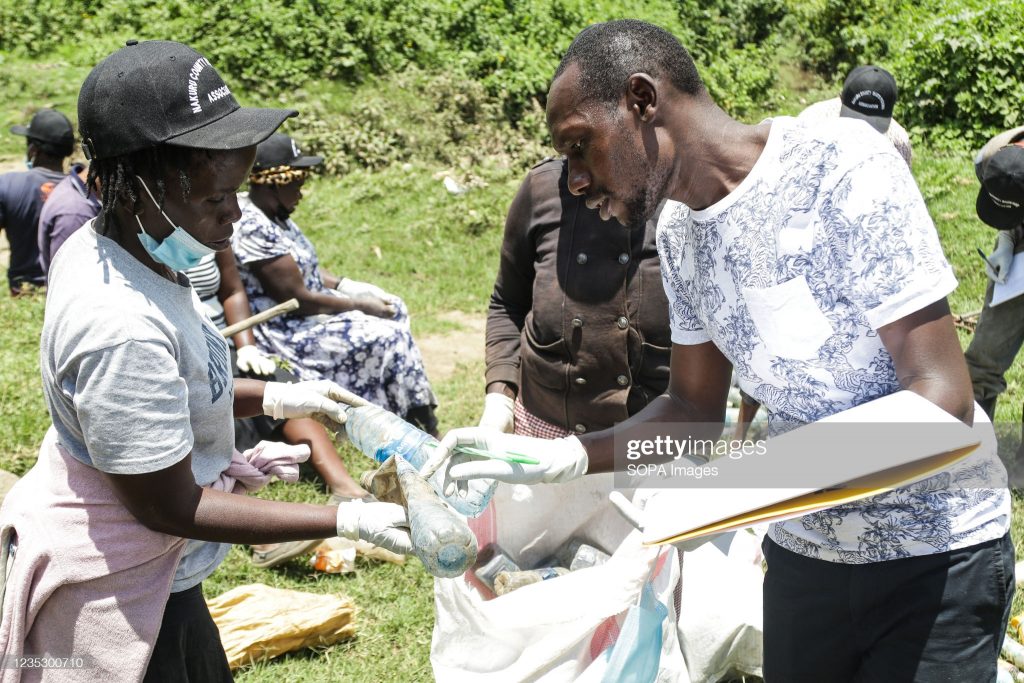 NAKURU, RIFT VALLEY, KENYA – 2021/09/15: Benard Ogembo (R), an environmentalist enters data during a cleanup and brand audit exercise as a Nakuru Waste Pickers Association volunteer reads out information on a plastic bottle.
A cloud based data platform called Wastebase developed by Unwaste, a UK based social enterprise is used. The App allows environmental organizations and activists to organize, map and visualize data about plastic waste by linking the product barcode to manufacturers and brands. (Photo by James Wakibia) 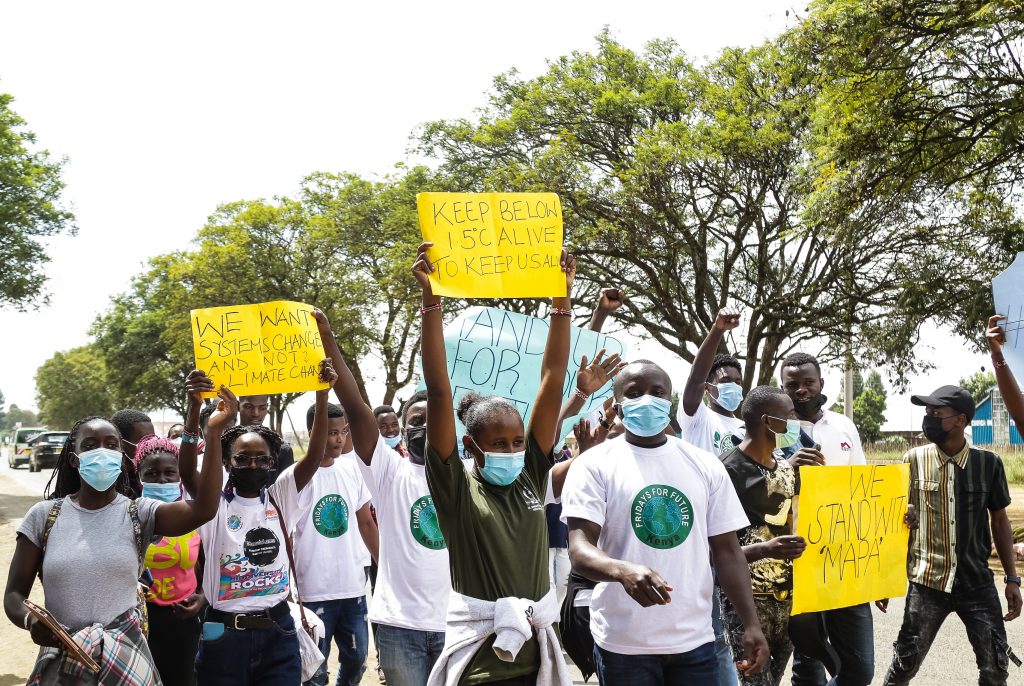 NAKURU, RIFT VALLEY, KENYA – 2021/09/24: Activists hold placards during a Fridays for Future protest in Nakuru.
Climate activists in Nakuru on September 24, 2021 joined others across the world in a Fridays for Future protest and tree planting; they also educated pupils of a local school on the impact of climate change.
The young African climate activists said that despite Africa being only responsible for less than 3% of total global carbon emissions, it ranks high among continents that have been most affected by extreme weather events and adverse impacts of climate change with the poor and marginalized communities bearing the greatest blunt. (Photo by James Wakibia)