I am discussing the usefulness of climate modeling to make predictions about the future as a reply to points raised by Professor Jordan Peterson on the “Joe Rogan Experience” Show” [1, 2m18s]:

Joe Rogan:  … The climate change one is a weird one.

Joe Rogan: What do you mean with everything?

2. Reactions by scientists of social media

The have been already several short replies by scientist and journalist, which debunk Jordan Peterson remarks as “absurd” and “dangerous” [2, 3], which however, do not do complete justice to the raised points.

Here is an evaluation of the performance of past climate projections based on academic research groups who made good predictions of global warming [4] (Figure 1), as indicated by the consistence of predicted and observed values.

Figure 1: Evaluation of the performance of past climate projections indicate good consistency between predicted and observed values [4, 5]

The fossil fuel company Exxon used climate models to predict CO2 concentration in the atmosphere and global average temperature increase in 1982, which turned out to be remarkably correct in predicting today’s observations (Figure 2): 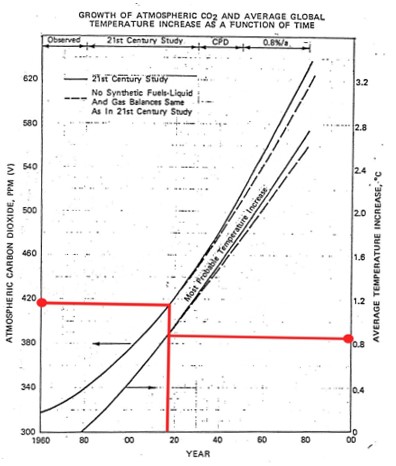 “But if models wer our only tool, climate sensitivity would always have large uncertainty. Models are imperfect and we will never be sure that they include all important processes. Fortunately, Earth’s history provides a remarkable rich record of how our planet responded  to climate forcings in the past. This records yields, by far, our most accurate assessment of climate sensitivity and climate feedbacks.”

This is also supported by a review paper by a group of leading climate scientists [9]:

The Earth system climate sensitivity is difficult to quantify due to the lack of palaeo-analogues for the present-day anthropogenic forcing, and the fact that ice sheet and climate–GHG feedbacks have yet to become globally significant in the Anthropocene. Furthermore, current models are unable to adequately simulate the physics of ice sheet decay and certain aspects of the natural  carbon and nitrogen cycles.

Hansen [6, p. 47] points out the lack of inclusion of potentially important variables (“slow climate feedbacks” already observable today, such  as permafrost melt with GHG release [6, p. 8]) in climate models, for example, of ice sheet disintegration, because it is poorly understood.  This is supported by a presentation by Professor Jason Box who listed multiple important variables for ice sheet disintegration which are currently not included [8, 16m23s].

Therefore, Hansen [6] recommends the following sources of evidence to predict the future climate:

I prefer to start with paleoclimate, the lessons history, which provide our best measure of how Earth responds to changing boundary conditions or forcings. Second, as a measure of how rapidly  climate can change, we need to look at what is happening now – observations of the ongoing climate response to fast-changing human and natural forcings. Climate models come third. Models aid interpretation of past climate, and they are needed to project future changes. So models are valuable, but only when used with knowledge of their capabilities and limitations.

Jordan Peterson claims that “climate” means “everything”. Although the climate affects living conditions on Earth in a very broad sense, climate is defined by a agreed core set of physical variables.

The climate, as long-term weather patterns in an area, is the mean and variability of meteorological variables over a time spanning from months to millions of years. Common variables are temperature, humidity, atmospheric pressure, wind, and precipitation. [10]

Jordan Peterson seems to understand climate as short-term, local weather events which  can be predicted only a few weeks into the future. However, climate is defined as long-term patterns of weather, which can be predicted over many years as demonstrated by empirical examples above.

The point that Jordan Peterson seems to make is that the climate consists of a large, complex set of variables. Climate models only represent a selected set of variables, which are arbitrarily chosen, implying that, therefore, the results are also arbitrary and not meaningful. This criticism is supported to a certain degree by scientific literature, which however, still considers climate models as a valuable source of evidence.

Peterson inflates his criticism to a point where it should be considered an “argumentum ad absurdum”, where he misunderstands the concept “climate” (as weather) and makes claims, which are not supported by scientific or empirical arguments anymore.

In general, Peterson’s use of words, for example, “Climate and everything are the same words.” is not helpful to communicate what he actually means, as confirmed by the questions by the radio host Joe Rogan.